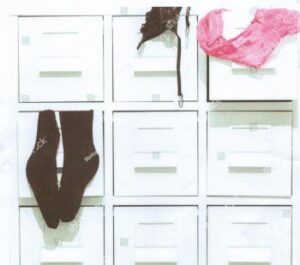 People say that Louise’s cotton and silk collections began in her Sydney studio.

But really it began when she was a little girl and would go into her grandmother’s bedroom (her grandmother lived in the house next door). She would open her grandmother’s lingerie drawers and look at her piles of cotton and silk nightgowns and robes, all beautifully hand embroidered, romantic but also very sexy.

Pin tucks, frills and pearl shell buttons seemed to froth forth from these drawers.

Of course, Louise was not supposed to be in her grandmother’s bedroom alone and unsupervised and pulling out onto the floor every one of her Nana’s luxury sleepwear.

And her grandmother only had the finest cottons and silk sleepwear. Louise’s Nana had bought a truckload of lingerie in Paris when she was twenty.

Louise’s grandmother had been taken to Europe by her mother and aunt to get her away from a man she wanted to marry. That is how she came to buy her trousseau in Paris. 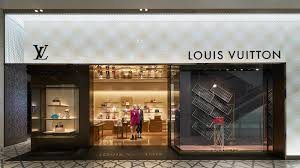 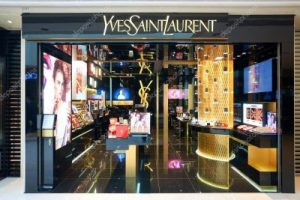 Of course as soon as the travelers returned to Sydney 18 months later, Louise’s grandmother plunged into the marriage. He was good looking and a great dancer. An asset at a dinner party. Isn’t that all you need in a husband?

Louise stared into her Nana’s drawers and boxes  and saw cotton voiles, cambrics, batistes and muslins mostly white and hand embroidered in white thread. Sometimes there would be one or two in  pale, pale pink, apricot or blue, but mostly they were white. 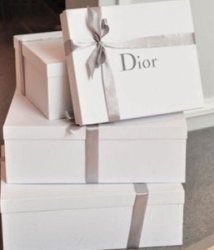 In a separate set of drawers and boxes in her lingerie cupboard was her grandmother’s silk nightwear collection. These drawers were known as Fort Knox.  Keep Out. Do Not Enter. Verboten.

Silk crepe de Chine, shiny silk satins, ivory, soft apricot, black, all stacked in rows with tissue paper between them and smelling of lavender. Louise’s little fingers, sticky from the cake she had just eaten were all over these beauties.

If only they had had CCTV in those days!
Every Tuesday Louise’s grandmother, (her name was Lola and Louise has named one of her cotton nightgowns after her) went to town for shopping and to play mahjongg at her  Ladies Club. She would not come back till well after Louise came home from school. 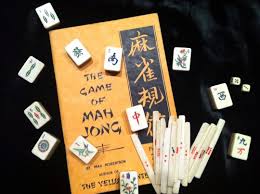 It was on Tuesdays that Louise gained access to Fort Knox.
Telling some plausible lie to her mother about where she was going, Louise sneaked into next door (a side entrance was always open).

Pausing momentarily to steal cake from her grandmother’s pantry, her next stop was the bedroom and the drawers

For some reason Louise loved lingerie. She loved the whiteness of the cotton nightgowns and the luxury of the ivory silk gowns. Her fingers would run over the hand embroidered bullion roses and up and down  the satin stitches on the bows and ribbons. Intricate, delicate designs thought up by expert embroiderers in the ateliers of Paris.

Laduree, those macarons are so delicious

Sometimes her grandmother Lola would reminisce about the lingerie boutiques in Paris where she had found her trousseau. Whenever she could give her mother and aunt the slip, Lola would go walkabout in the luxury designer arrondissements. En route she would stray into her favourite afternoon tea watering hole Laduree. So delicious. Lola would gorge  on macarons in the same manner she gorged on lingerie. Luckily Lola was tall and slim and remained so her whole life.

Life is not fair. 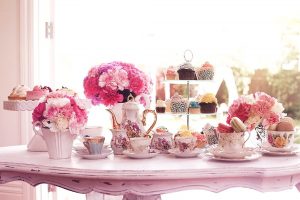 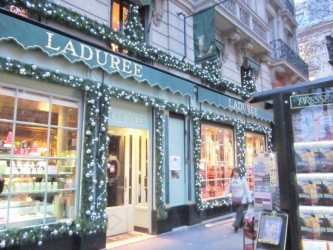 Afternoon tea over, Lola swooped into the stores specializing in all the beautiful things she loved and intended to possess.

Lola’s daddy had handed her plenty of cash.

It was lucky her Daddy had secretly handed her funds aplenty before she left Sydney and sailed to Paris. Lola’s Daddy was rather like the man Lola wanted to marry. He was a darling man, good looking, a great dancer, and an asset at a dinner party. Lola’s mother loved him but found his gambling tiresome. Especially as she had to bail him out periodically.

When Lola entered a Parisian lingerie boutique she kind of went into a trance. Floating down racks of silk satins, letting her hands glide seductively across each luxury nightgown. Lola felt  the softness next to her skin. This was Lola heaven.

When you feel so strongly about such lovely things, well naturally you feel compelled to introduce yourself to them. In the most intimate of ways.

Lola was loaded and she did not short change her inclinations.

Out came those divine Parisian boxes we know and love. In went clouds of tissue paper and resting in this sumptuous nest went Lola’s hearts desires. 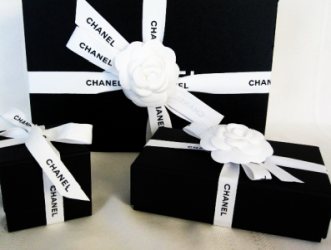 Lola would always begin with five or six or twenty white cotton nightgowns.

They had to have fine, delicate pin tucking, preferably on the bodice, where Lola could see it when she looked in the mirror.

She did this often.

She liked some with cap sleeves to show off her arms and some with ¾ sleeves for a little arm mystery.

A narrow cotton organdy frill or pleat on the end of a cap or long sleeve sent Lola into purrs of approval.

White hand smocking was her Waterloo. Unlike Napoleon, who disliked losing, Lola was a willing captive of all things smocked. She handed herself in and went willingly to the vendeuse.

Darling, she would coo, Darling,

Just go and find me everything you have with white smocking. The vendeuse would lead Lola into the back salon where, like a lioness with a kill in sight, she knew she was going have a lot of fun with Lola.

Lola didn’t really see the point of self-discipline. She just gorged herself on whatever took her fancy. And most lingerie she saw in Paris when she was twenty was, let’s face it, a necessity.

Her Daddy had taught her the process of avoiding the consequences of unpleasantness. Like the time her mother had had to rescue her jewellery which he had lost in a gambling bet. Lola watched and learnt. Her father was so gorgeous when he was contrite.  And Lola learnt to  pile on the charm in buckets whenever she was in a tight corner. She was in fact her father’s child and he loved her. Thus the secret cache of funds he had given her was so absolutely lovely.

Shall we continue with Lola in Paris. Paris is so returnable don’t you find. And those money pits so unavoidable.

Lola always started with cotton sleepwear. She said it was the main course and silk the dessert. 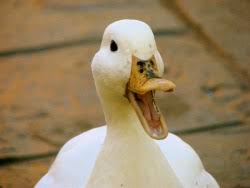 She  then dug into her purse to feel Daddy’s luscious French bank notes sleeping peacefully. They were rudely awakened and handed to the French lioness who growled contentedly. 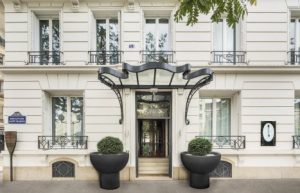 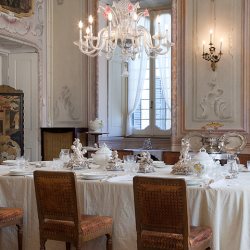 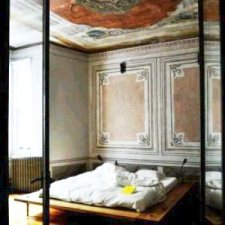 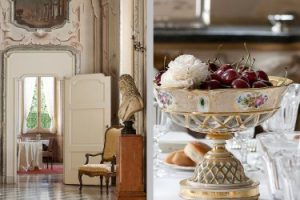 Send everything to my hotel, Lola smiled sweetly.

The French lioness bowed and scraped. Lola was fond of that.

That evening the doors to Lola’s suite were swung open and in came three boys. They swayed from side to side like camels laden with carpets in an Istanbul bazaar.

Lola rushed towards them arms outstretched, blowing kisses as her eyes took in this bounty. Her face had the look of a pirate spotting a Spanish galleon loaded with gold.

Lola could easily have dissolved  into raucous Australian exuberance. Thank God she checked herself. Her Daddy’s wise words flung themselves into her brain.

Ripping undone the bows tying up the boxes, Lola flew like a bird of prey deep into each glorious, sumptuous luxurious well of lingerie.

She pulled out hand embroidered sleepwear fit for Lola. 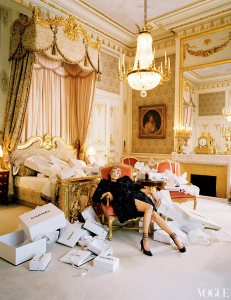 Pretty, pin tucked cotton sleepwear with narrow cotton organdy frills around the low cut necks and sleeves. Some nightwear had cap sleeves for when Lola wanted arm exposure. Some had ¾ sleeves for arm mystery moments.

White hand embroidered roses, stems and leaves stitched onto romantic bodices. Flowing nightgown skirts in clouds of cotton voile.  Mountains of cotton sleepwear falling out and onto the floor where they  lay like  huge white avalanches of ice and snow.

After devouring her main course, Lola progressed to the dessert, her silk sleepwear picks.  Thank you Daddy.

Silk is the most divine fabric, slippery, flexible, shiny if satin silk, matt if crepe de chine. Washable if it is good quality (Louise’s silk collection is washable) and long lasting if you are kind and hand wash it.

Lola by nature was not a kind person

but in Sydney she had a washing lady and so her silk sleepwear lasted.

But anyway, that problem could be fixed  by leaving her nightgowns in the hotel bed linen whenever she traveled. Lola discovered early the rapaciousness of hotel laundresses. Lola’s mother would ring down to the hotel laundry and ask if Lola’s nightgown had been found in the bed linen.

Alas it rarely was.

This is a practice of hotel laundries to this day and a source of satisfaction to Louise who regularly replaces nightgowns stolen in this way from her darling clients, most of whom travel the globe like migrating flocks of birds.

No we are speaking of all the ladies in all the hotel laundries around the world who go to bed in her creations.

Long life to the laundress ladies. 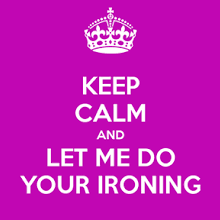 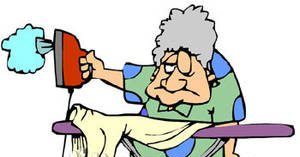